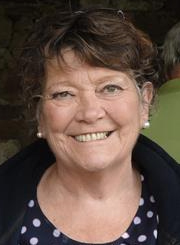 I didn’t choose to become a Reader, God chose me.  I think this has been his plan for my life for a long time but I did not realise it.  It’s rather like having an itch which you cannot scratch.  Now, as I look back, it seems obvious but it has taken me ages to understand. I have a quiet place near a cross in the vines where I can sit and ponder and I have done a lot of that.

I have been a teacher or examiner for most of my professional life but as a single mum I had to look after my son and my elderly mother and had very little spare time.  Then, eighteen months after retiring out to France with Brian, who became my husband, he died.  I don’t think you ever get over such an event, but you learn to live with it.  That is when the “itch” became stronger and I realised God was calling me.

So, the first step was to talk this over with Roger, our chaplain and he agreed that my calling had to be tested. This testing of my calling involved a visit from Revd Elaine Labourel, a priest from Paris    who interviewed me.  This interview was very thorough and lasted over three hours.  I can’t remember very much of what she asked me but at the end she told me she would recommend me to our suffragan bishop, Bishop David (our Warden of Readers) to begin training. The next stage was bureaucratic.  I had to be cleared to work with children and vulnerable adults and this involved police checks.  As I had lived in both Spain and Italy as well as UK this again took time.

So what does training consist of?  I have to complete six modules through distance learning on a course run by St John’s Nottingham.  During each module I have to write three essays.  I have completed two modules, on the Old Testament and on the New Testament.  Now I am working on the module about the Creeds and I am just about to write the essays.  It is taking a lot longer than I expected and has been very challenging, but I have learnt so much and it is such a joy.  I have also given four sermons and taken Sung Evensong. I have been to two workshops in England which were marvellous as I was able to meet other Readers and Readers in Training.  I need to complete three more modules and then apply to be licensed in the Diocese of Europe.

I am so happy because I feel I am following the path which God has set for me and so thankful that I have so much support from Roger, Elaine, the Diocese, the congregation and friends back in England.

Who/What is a Church of England Reader?

Readers are lay people in the Church of England, from all walks of life, who are called by God, theologically trained and licensed by the Church to preach, teach, lead worship and assist in pastoral, evangelistic and liturgical work.

The office of Reader is the only lay ministry in the Church of England which is voluntary, nationally accredited, Episcopally licensed and governed by canon. There are now over 10,000 Readers, with men and women represented almost equally. Most are licensed to a parish but some are chaplains in prisons, hospitals, hospices or schools, a few are in charge of parishes.

Although nationally authorised, the scope of ministry and roles undertaken by Readers differs across the dioceses. In addition, each diocese currently provides its own programme of initial and continued training, which are moderated nationally to ensure consistency in preparing Readers for their office, supporting them and helping to keep them up to date.

Readers are supported by a Warden of Readers and a Secretary in each diocese and by the Central Readers Council based at Church House, Westminster.

In the Anglican tradition, the role of licensed lay readers, whose prominence varies by region, is similar to a non-conformist lay preacher, and can involve:

Although in many parishes these duties can be performed by any reasonably competent layperson whom has been properly instructed, the key to the Reader's licence is that he or she is permitted to do them in the absence of a priest.

Licensed Readers are entitled to wear a blue scarf.

Reader training usually incorporates a selection of the following but this can vary across training colleges:

In the Diocese of Europe, at the end of training the Chaplaincy Council has to agree to the candidate going forward for licensing. The candidate is licensed as well as admitted to the Order of Readers at a special service.

The office of Lay Reader has existed in its present form since 1866. The first female lay readers were licensed during the First World War due to the shortage of men.

Click here to return to "Our Faith" home page